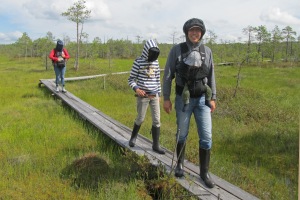 Elmer Topp-Jorgensen who coordinates 64 managers of international field stations participating in the project had a meeting with the senior management of the University. During the meeting different aspects of University’s cooperation with foreign scientists within the INTERACT project were discussed.

First of all Mr. Topp-Jorgensen told the representatives of Yugra State University, the Vice-rector for academic affairs Roman Kuchin and the head of the chair of IT and computer engineering Sergei Semenov about the project’s four-year long history, its objectives and achievements. He also noticed that the coverage of researchable territories would not be complete without YSU staff taken part in this project on Mukhrino field station.

Global network INTERACT includes 64 stations, 5 of them are located in Russia. Within the project sponsored by the European Union scientists from all over the world have opportunity to take part in regular forums of field stations managers, conduct collaborative studies and arrange academic trips. Elmer called a catalogue of stations included in the INTERACT network some kind of a tourist booklet for researchers that helps to get familiar with field stations activities and to choose the most suitable one for their own researches. Mukhrino field station is the most popular station in Russia. Only during 2014 it has already been visited by over 20 foreign scientists from Estonia, Finland, France, Spain and other countries.

During the meeting Mr. Topp-Jorgensen thanked Elena Lapshina, the head of the Scientific and study centre «Environmental dynamics and global climate change», for her personal contribution to project development and for her team’s efforts due to which Mukhrino field station has turned into a well-equipped research center over the last years.